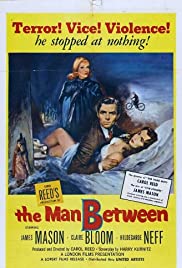 “The Man Between” is a 1953 British thriller film directed by Carol Reed and starring James Mason, Claire Bloom, Hildegard Knef and Geoffrey Toone. A British woman on a visit to post-war Berlin is caught up in an espionage ring smuggling secrets into and out of the Eastern Bloc.