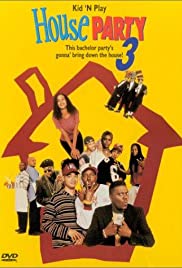 Hip Hop duo Kid & Play return in the second follow-up to their 1990 screen debut House Party. Kid (Christopher “Kid” Reid) is taking the plunge and marrying his girlfriend Veda (Angela Means), while his friend Play (Christopher Martin) is dipping his toes into the music business, managing a roughneck female rap act called Sex as a Weapon. Play books the ladies for a concert with heavy-hitting pr