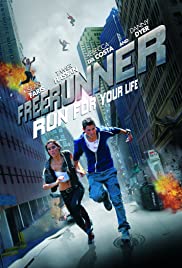 With a ticking bomb locked to his neck, a young freerunner races against the clock and all types of baddies to get from one end of the city to the other to save himself and his girlfriend.

Sidelined by an injury incurred while protecting his young brother, underground fighter Charlie Fontaine feels blindsided when he discovers his brother having sex on his couch with his new wife, Kat. Fueled by rage, a determined Charlie makes plans to get back in the ring and take on his brother in a fight to the death.