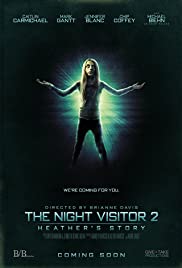 The sequel to Jennifer Blanc’s cult hit 2013 film “The Night Visitor”. Directed by that film’s star Brianne Davis, The Night Visitor 2:HEATHER’S STORY runs parallel to the original Night Visitor, telling the story of Heather, a special young girl, who must protect her family and the planet from the same other-earthly being. The sequel delves deeper into the mysteries that plagued the Stevens family and their son Ricky with the help of psychic and medium Daniel.