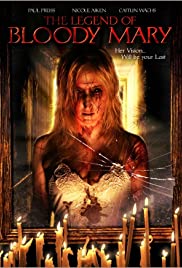 Ryan has been plagued with nightmares since the night his sister Amy went missing 8 years earlier after playing the game “Bloody Mary.” Amy had stumbled onto a website on the Internet (www.marked4mary.com) about a witch called Bloody Mary and a game to summon her evil spirit. Now a senior in college, Ryan is reaching a mental breaking point from the years of stress and guilt from his sisters disappearance. His girlfriend Rachel frustrated herself at Ryan’s emotional distance and self pity, calls for help to a former professor of Ryan’s, Father O’Neal. Father O’Neal is both a priest and a archaeologist who decides to help Ryan end his tormenting grief by using his detective skills and wit to figure out what exactly happened to Ryan’s sister, and uncover the truth to the Legend of Bloody Mary