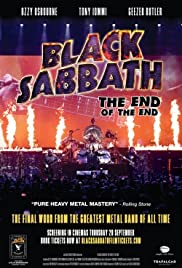 Black Sabbath the End of the End

Black Sabbath the End of the End

Chronicles the final tour from Black Sabbath. On February 4th, 2017, Black Sabbath takes the stage in Birmingham, the city where it all began, to play the 81st and final gig of the tour and bring down the curtain on a career that spanned almost half a century.