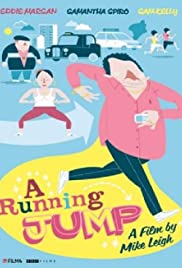 Leigh’s comedy short follows Gary’s (Lee Ingleby) attempt to buy a second-hand car. What should be a straightforward task is turned into something of a quest by various people, including dodgy East End car dealer Perry (Eddie Marsan), Perry’s taxi-driver dad (Sam Kelly), a garage owner called Derek (Robert Putt) and, not least, Perry’s wife Debbie (Samantha Spiro). Oh, and a couple of twins (Danielle and Nichole Bird) are thrown into the mix to cause further confusion. The narrative’s series of gags are shot through with sporting references and images of everyday folk taking part in grassroots sports. The swimmers, joggers, cyclists, five-a-side footballers and the rest underline the importance of sport, however casual, to the population in general and the East End of London in particular in this Olympic year. [Source — Channel 4]