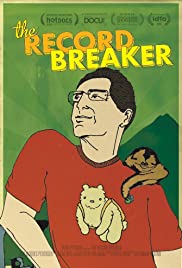 Ashrita Furman holds the official record for the most Guinness World Records by one individual, including marks for “Largest Hula Hoop,” “Most Apples Sliced in Mid-Air with a Samurai Sword,” and “Longest Distance Bicycling Underwater.” A health food store owner and devotee of meditation, Furman travels the world creating new categories for record achievement. In The Record Breaker we meet Furman, a singularly driven character, and his merry band of compatriots (including Champ the dog) as he’s about to attempt to climb Machu Picchu on stilts.