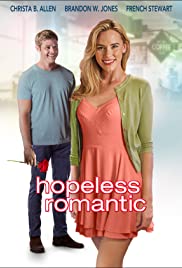 Hopeless romantic Matt (Brandon W. Jones) decides it’s time to pop the big question to his girlfriend, Alexis (Cassi Thomson). Before the big evening he practices his proposal on his best friend, Liz (Christa B. Allen). Matt believes if he follows the rules of all of his favorite romantic comedies he’s guaranteed a “Yes!” To Matt’s dismay, Alexis gently rejects him stating he’s only interested in the idea of being in love and not a real relationship. After this unexpected disaster, Matt binge watches one rom-com after another and comes up with plan to win Alexis back. Though Liz thinks Matt’s plan is absurd she agrees to be his wingman. The operation to rekindle his relationship appears to be working only for Matt to face the reality that he and Alexis may have grown apart and his heart belongs elsewhere.