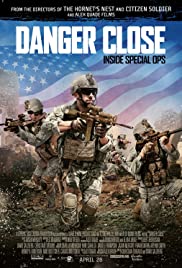 Freelance female war reporter Alex Quade covers U.S. Special Operations Forces (SOF) on highly classified combat missions. Since 2001, she has embedded with elite SOF, including the U.S. Army Special Forces or Green Berets, Army Rangers, Navy Seals, and CIA clandestine operatives to tell their stories from the front lines. “Danger Close” follows Alex as she lives alongside these highly trained forces on some of the most daring missions ever documented in Iraq and Afghanistan.